the one where I can't think of a title

I am an ordinary woman of ordinary intelligence, ordinary looks, ordinary skills. I have led an ordinary life during which I am rarely bored, often amused, occasionally afraid, usually just peachy keen.

The one extraordinary thing I have done is to have birthed my daughter and raised her to this magical age of 16.

I know most parents (those who wanted and love their children, at least) think their children are extraordinary, are special, are different.

I often qualify my opinion of my daughter and her abilities with the phrase, "I'm biased because she's mine."

More and more, though, as she's out in the world more, sharing herself more with other people, teens and adults, I begin to see her through other people's eyes.

And I'm a little astonished.

My Girl began taking piano lessons when she was 5 and continued through seventh-grade. By eighth-grade, she, her teacher and her parents agreed that the lessons and practices were taking more time than she had, that her heart was no longer in the lessons. So after eight years, we stopped.

But she did not stop playing. She found sheet music she loved on the Internet and downloaded it, stole piano books from her father and sightread Bach and Beethoven, some jazz. She agreed to be part of a live band for the high school musical last year as the keyboardist, learned pages and pages of music, was the foundation of the band, accompanied the singers, played, played, played.

I don't have much to do with her abilities. She gets the music from her dad and the art skills from my mother.

A couple of days ago, I was in the library finally hunting down books that might appeal to my current, finicky reading taste. The art teacher from the Girl's high school traditionally submits work by her students to hang in December along the library balcony where everyone can see. My Girl didn't get into the drawing class she requested, so her work is, of course, not included, though my Girl won "Best in Show" for a juried show she entered in late October. I suppose Mrs. Art's class was too full of juniors and seniors for her to make room for a mere sophomore. Although some of the drawings the teacher hung at the library were quite nice, when I saw them, studied them all, I thought, "Mrs. Art is going to shit her pants when she finally gets the Girl in her classes." Drawing is all my Girl wants to do. Drawing is how she intends to earn a living when she is finally finished with school. She is self-taught.

As soon as my Girl was old enough to hold a crayon, a pencil, a pen, I started carrying what I called her drawing bag with us wherever we went, just in case we got stuck someplace for a while and she needed something to do. The bag always containe a little sketch pad, colored pencils, pens. My daddy tried to tell me that she is left handed because I always sat on her left side and handed her things into her left hand, but I just laughed at him then and laugh at him now.

I do think that her left-handedness has something to do with this drawing ability.

She continues to work on the picture in progress that I've been posting over the past week or two. Last night, she must have stayed up until 3 working on it.

She stuns me, and I continue to think when I see her work, have conversations with her, watch her with her friends, listen to her play piano and drum, "Did I really make this?"

My answer is often, "No, not you. She just came to you and made herself."

It doesn't matter, really. She stuns me. 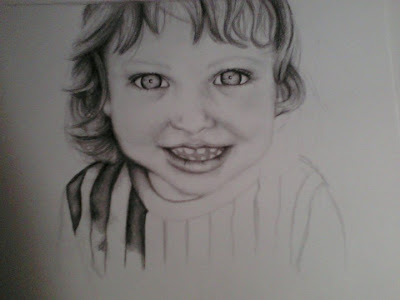 Posted by Elizabeth Marie at 3:52 PM