Reverb 10, the one I don't appreciate

What's the one thing you have come to appreciate most in the past year? How do you express gratitude for it?

I don't mean that the prompt author thinks she's better than I am. She seems lovely. And young. All of you prompt authors seem so young! Really (even if you happen to be over 40 or 50 or 60, you seem young). Maybe next year, I'll find a project (or create a project) developed by Women of a Certain Age, prompts designed to appeal to the insanely cynical and sarcastic middle-aged, menopausal woman who is most grateful that her womb has finally fucking dried up. Maybe someone like Nora Ephron could create something for those of us with a sly, slightly self-deprecating, funny, snarky approach toward our lovely lives. It's not that we don't appreciate what we have. We are blossoming, thriving, striving, creating, giving even as our boobs sag down to our ankles, even as we limp toward old age. Some of us just have a bit of an edge, need to spice things up with the occasional use of the word FUCK. I don't know. Maybe Reverb 10 makes me inclined to take myself too seriously. That won't do.

So. Yeah. I'm not going to play with this one today.

(OK. I'm going to write this next section in parentheses because it's an afterthought. I pulled up the file holding this year's National Novel Writing Month work and am skimming through the parts I'm probably going to "excise" and save for another story. I dunno. Maybe I'm a shitty writer, but I've been laughing like a fool as I've been reading through the first scene where we meet Ambrose, the "not-angel," and his friend and human mentor, Mr. Yeti. What was I thinking? Well, I suppose I wasn't thinking. That's one of the points of NaNoWriMo, to write without thinking. It's So. Much. Fun.

Below is a tiny excerpt that includes a note I wrote to myself about one of the characters. I am still laughing. Seriously (or not), I have THE best life. Ever.

Ambrose stood inside the ballon darts booth holding a wrench, feeling wretched. He'd been with the carnival for a couple of weeks, had helped assemble and disassemble game booths, rides, ticket booths, the tent where the "exotics" performed. But he couldn't ever get it right. The only reason the boss hadn't fired him was because he'd figured out that Ambrose was something like an angel, and the boss wasn't sure what the consequences of firing an angel would be.

"Ambrose, goddammit! What the fuck are you doing in there? Aren't you finished?"

"Almost, Mr. Yeti. I couldn't remember what to do with the wrench."

"Holy fucking Christ on a waffle! How many times do I have to show you?"

"If I didn't know better, kid, I'd say you were lacking in mental acuity."

[I know it seems strange for a carnival "boss" to use words like "acuity," but the truth is, Mr. Yeti has a PhD in Russian literature and a masters in the sociology of suburbs. This is why he chooses a life in which he moves around so much. The suburbs. They scared the shit out of him.])

also, there is always this to appreciate: 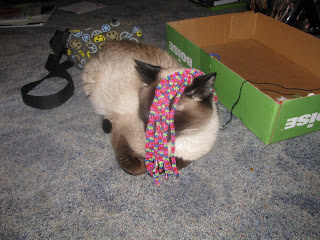 Posted by Elizabeth Marie at 10:52 AM