Reverb 10, the one with the letters

December 21 – Future Self. Imagine yourself five years from now. What advice would you give your current self for the year ahead? (Bonus: Write a note to yourself 10 years ago. What would you tell your younger self?)

(note: I believe in the positive power of negative thinking, in defensive pessimism (it's a legitimate approach - there are books). This may not be what Jenny Blake had in mind, but I'm not sure that matters.)

I’m writing this from the Super 8 Motel on “Historic Route 66” in Gallup, N.M. It’s 2 a.m. Monday, Dec. 21, 2015, Winter Solstice. This is one of the dates connected to prophecies about the Apocalypse, but we’re still here, so that’s one less thing to worry you.

The sixth train since midnight has just rattled down the tracks, shrieking. Even noise canceling headphones are no match for these trains. I write in the night and sleep during the day except for a couple of hours when I leave my room and drive around so that housekeeping can scrub out the sink and bathtub, run a brush around the toilet’s rim. I like how that sharp "clean room" scent stings my nostrils when I return, like that underneath the sterility, I catch the faint perfume of someone else’s hair product.

I live here in this hotel, at least for now. I rent the room by the week, and the management doesn’t seem to mind. I live alone except that you will acquire a dog sometime after your daughter leaves for college, sometime in the fall of 2013, maybe, a poodle mix who reminds you of the standard-sized poodle you had as a kid. You name her Claudia after a character in one of those many novels-in-progress you wrote between 2000 and 2015. Sometimes I call her Clyde. She’s a good dog.

I’m not sure how or why I ended up here except Gallup is where Past Lizzie went the summer of 1998, the summer you turned 40. You needed to escape our responsible self, the one who was trying to juggle dying father with preschooler with ailing marriage. You attended the Inter-Tribal Indian Ceremonial, an event no one else in your life was interested in experiencing, which was exactly what you wanted. You flirted with a Navajo artist or he flirted with you. Remember how discouraged you were to realize he thought he was the pretty one, realized he truly was prettier than you? That was when you began to feel like it was “too late.” You were disappointed in yourself for caring that you were losing your looks.

I’m going to say that I return here to Gallup in the future to seek some kind of stark, alien comfort, to face myself stripped of the familiar distractions and stresses.

I’m sorry to tell you that we’re nearly out of money. You do get better at focusing on your work, and your work gets better and better. But the world economy continues to tank. You will use a great chunk of your retirement and savings to a) help put your daughter through art school, and b) to pay your mortgage. You will sell the terrible, little house in early 2014 and become a renter.

Your husband has found a nice woman to love, so you won’t have to worry about his loneliness when you reach this year. You can stop worrying now, in fact. Trust me. He finds someone. He hasn't divorced you yet in 2015, and they haven’t married yet. But they live together in his dear, little condo. She is as funny as he is, and less tightly wound. She knits your daughter wildly colored scarves to keep her warm when she visits Ohio from Georgia where your daughter attends school.

Here in 2015, fewer and fewer people read books. This trend is no surprise. Reality television continues to be the preferred entertainment. There is even a show called "Coupon Madness" where each week, smart shoppers try to find the best deals on cantaloupe and whole grain linguine.

No one wants what we have to offer, you and I. Continue writing, anyway. It doesn’t matter who wants what. Only the writing matters, the effort to connect through words. It's still breath. It still keeps you alive.

Love,
Lizzie Yet to Come


Bonus letter to my 42-year-old self:

I don’t mean to frighten you, but things are going to start sucking even more than they have in the past couple of years. Those things you feared? Yeah, they come to pass.

You will get through this. It will not kill you. Yes, you will find yourself weeping in your bed instead of rising to start your day those weeks when your daughter is with her father. Yes, you will drink endless bottles of cabernet as you paint a wall or a mantel piece with the wrong kind of paint. Yes, you will scream into the carpet when yet another thing goes wrong with the plumbing in the dreadful little house you will buy.

But you will survive. You will work in a school for a year and in a coffee shop for a month (I know that sounds impossible, but you will be the sandwich maker); you will write the beginnings of eight novels, dozens and dozens of poems. You will give writing workshops to children and teens, and they will love you.

It really will be all right, I promise. Impossible though it will seem, the rage and fear you will face in the next three or four years will pass. And look! Look at what your daughter can do! You made her. 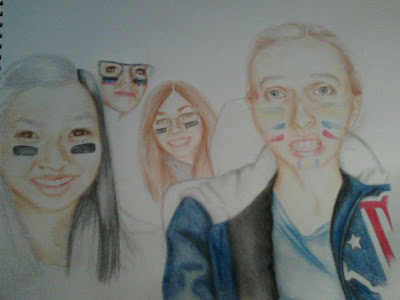 One of my daughter's in-progress pieces in colored pencil copied from a photograph.
Posted by Elizabeth Marie at 11:18 AM